Why do companies like Unilever , ITC and Godrej spend money on marketing products that are in the range of 1 Re, 5Re and alike? Why does Hero motorcycles and Maruti portray their products in the rural back ground? Why did Nokia 1100 revolutionise the Indian mobile phone market with an in built torch light? If you ever wondered about the connection to all this, it’s the rural Indian market that was the target audience and will continue to be for the times to come. Looking at the picture, you will see for yourself an estimate of 6,40,000 villages contribute for 50% of purchases while the big cities contribute to only 25%. [1] 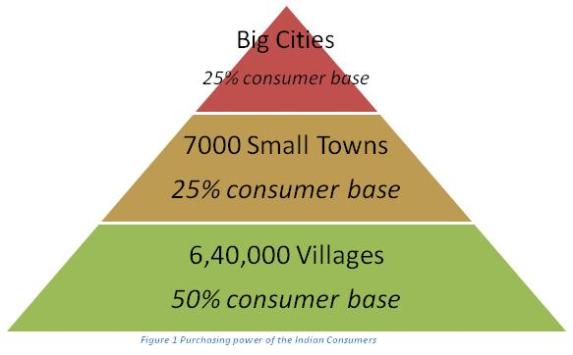 Agriculture remains the main source of income in the villages. Agriculture is carried over two seasons in most parts of the country; Kharif , sowing starts in may and harvest is usually in October and Rabi, sowing starts in October and harvests are carried out in April [2]. Festivals in India have been celebrated during particular seasons and the typical Indian would trace it’s history to the mythological stories, which I’m not refuting but just adding an perspective of economies to the equation. Agriculture drives the majority of Indian economy and the Indian population and it solely depends on the monsoons which set in may, when the harvest of Rabi season ends and Kharif begins. A good monsoon will result in a bumper crop and yes more money for the farmer. Coinciding with this is the Indian festive season with the major ones of Dasara and Deepavali that fall in October and November by when the monsoons would have decided the fate of Indian agriculture.

Looking at 2013, the agriculture is projected to achieve a 5% growth that’s a rise of 15-20% rural income as a result of a good monsoon [1]. Monsoons have been great in fact, there is nearly a 10% increase compared to the yearly average and the highest since 1994. The Indian farmers are happy, a clear sign is the increase in automobile sales in August. Of course talking of automobiles I mean farm tractors and allied machinery. The festive season is just around the corner, the purchasing house in villages are all ready with a good produce and so we can expect an increase in consumer purchase this festive season. It gets a little interesting from the Indian Government’s view though who are trying to curb the purchase of imported goods and most importantly GOLD. The Indian consumers whether rural or urban all have a liking for the yellow metal and this super shopping season should see a gold rush which also reminds me of the celebration of Dhanteras which preludes Deepavali and is believed to be an auspicious day to buy GOLD.

It’s all about economics in the end!